If you were to walk through the ancient fields of Wales, you may come across a woman on a white horse, her hair wild, and her soul fierce, the witch t
Posted by Theresa Koch
Tags:
#legend#witch 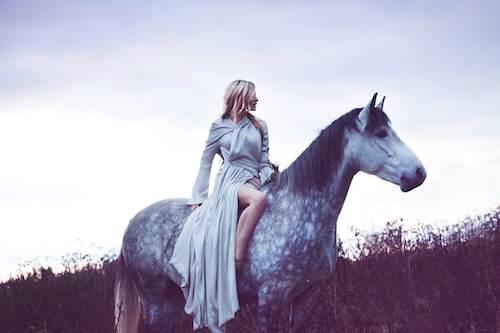 If you were to walk through the ancient fields of Wales, you may come across a woman on a white horse, her hair wild, and her soul fierce, the witch they call Rhiannon.

Rhiannon translates to Great Queen or White Witch. She is often associated with the image of the horse, but also the moon, horseshoes, and birds.

Shea keeps a flock of magical birds near her always who can send mere mortals into the deepest slumber, or wake the spirits from beyond the veil and bring them to life. Rhiannon’s birds appear in Celtic symbols and in Celtic art.

Rhiannon is a good witch, and has been a figure inspirational to poets, artists, and singers for centuries. She is a healer and a symbol of sovereignty. She possesses a deep and powerful magic and was known to be incredibly generous.

Rhiannon teaches us to own our own life and story. She is as beautiful as she is courageous.

One of the most famous tales of Rhiannon is of her and her husband Pwyll in the Mabinogion, a collection of stories collected during the 12th century from oral tradition.

These are the earliest prose stories of Great Britain.

When Rhiannon first came to Pwyll, a mere mortal, she showed herself as a goddess in gold upon a horse. She accepted Pwyll’s hand in marriage if only to escape an engagement to Gwawl, who she did not love.

Rhiannon was an incredibly strategic goddess.

Some time into their marriage, Rhiannon gave birth to a baby boy. However, the infant disappeared in the middle of the night. The terrified nursemaids (who were asleep when the baby vanished) smeared blood on the sleeping goddess in order to frame her for the disappearance.

Pwyll stood by his wronged wife, and years later the infant was returned. They renamed the child Pryderi, meaning the end of trouble, as then Rhiannon could finally rest. When he grew up he was a strong and fair ruler. Pryderi would also become associated with horses in the lineage of his powerful, goddess mother.

Ways to Work  with the energy of Rhiannon:

Connect with the Symbol of a Horse

Horses are beautiful, strong, and wild creatures. The symbol of the horse is closely tied to Rhiannon and her story. How can you harness this sort of strength in your own life? When you think of horses what do you imagine? What archetypes can these wild creatures inspire you to pay attention to in your own life?

Be Your Own Great Queen

Rhiannon both can awaken and encourage a deep slumber. When we’re waking and sleeping what realms do we have access to? Can we work with Rhiannon in dream divination? What sort of dream practice can you develop, inspired by this powerful and ancient Celtic Witch.