A long time ago, a shepherd and his wife lived near the base of a great mountain.
Posted by Theresa Koch
Tags:
#myth 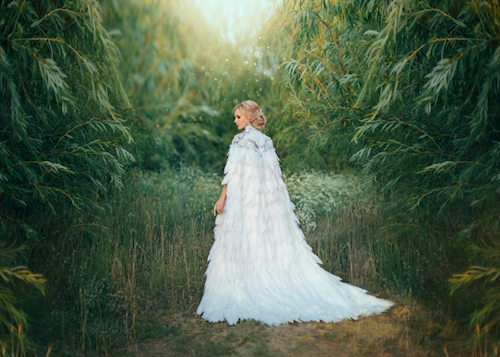 A long time ago, a shepherd and his wife lived near the base of a great mountain. The young couple was humble and hardworking. Although they didn’t have much money, the wife was rich in creativity. Even on the days that her husband returned empty-handed from his hunting trips, the woman praised his efforts. Each night, while he mourned the feast-that-could-have-been, his wife stirred, sang, and created a delicious broth from the wild herbs that grew on the hillside.

Towards the end of one week, as the shepherd laced up his boots and lamented his poor hunting prowess, his wife offered a suggestion that would change everything:

“How about venturing further up the mountain today?” she said. “It is Friday, after all, maybe Frigga is handing out blessings.”

The man was not as spiritual (nor as intuitive) as his wife, but he longed to please her. He set out with the intention that he would not return unless he was carrying enough food to feed a family thrice his size.

The man walked and waited, but the animals were wiser than the shepherd. Just as he caught a glimpse of a furry tail, the creature would dart up the mountain. As the trail twisted and grew steeper with each step, the land became increasingly wild. The man had never ventured this far up the mountain and was about to turn around when he remembered the promise to his wife.

Renewed in his purpose, the shepherd forged ahead.

As he rounded the next bend, something peculiar happened—a great stone arch appeared in front of the young man! From the entryway hung curtains of ivy and blooming vines. Brilliant crystals were stacked into neat piles that created a display of rainbow-colored lights.

Standing in the center of this magickal domain was a woman. A goddess. She was draped in a flowing silver gown and encircled by at least ten maidens, all equal in beauty.

Upon realizing that he was in the presence of divinity, the man quickly dropped to his knees and bowed his head.

“Great goddess,” said the shepherd, “are you the one that my wife speaks of, that goes by the name Frigga?”

The goddess nodded her head. Without moving her lips, she told the man that she had heard his wife’s prayers and was aware of their struggles. Because it was her sacred day and the man had traveled so far to provide for his family, she would like to offer him a gift.

With her blessing, she told the man to choose one item from within her sacred space.

The shepherd was flustered. He eyed the crystals and jewels that would no doubt fetch a high price at the market. But for a reason that the man couldn’t explain, he pointed to a bundle of tiny blue flowers that the goddess clutched in her hand.

The goddess smiled. She assured him that this was a wise choice. As she passed him the flowers and a small handful of seeds, she explained that so long as the flowers maintained their youthful hue, that he would live well and happily.

Before the man could thank Frigga, she vanished. All that remained of the goddess, the crystals, and the stone archway, was a cloud of mist.

The shepherd sprinted down the mountain. When he told his wife the story of the goddess and the blue flowers, she took a small pinch of seeds and scattered them to the wind. Instead of falling at their feet, the seeds drifted to the empty fields and planted themselves in the dirt.

Within a few days, the fields began sprouting blue flowers. At sunset, when the couple gathered herbs for their evening strew, they would occasionally see a cloud of mist watching over their fields.

Only when the flax seeds were ripe and ready for harvest did Frigga appear once more. This time, she announced that she wished to speak with the woman of the house.

Frigga showed the woman how to harvest and spin flax into fine linen. Some say it was as soft as silk yet strong as wool. Word traveled quickly, and it wasn’t long before the shepherd’s wife was known as the finest weaver around. As the couple’s popularity increased, their pockets grew fatter, and the small family expanded.

The shepherd and the weaver had several children. As the years passed, the children became adults and had families of their own.

One week, on a Friday, the man was reminiscing on his good fortune when he noticed that the original bouquet of flowers had begun to wilt. The bundle that Frigga gifted him many years ago had always remained on the family altar. Until that day, the flowers had glowed bright and youthful despite their age. The shepherd was unsure what to do, so he gave the flowers fresh water and spoke to them as if he were speaking directly to the goddess.

When he received no answer, the man gazed outdoors upon the fields of blue flowers. Like the goddess predicted, the flowers had provided for his family and generations to come. Upon remembering Frigga’s words, the man understood that, like the bouquet, his life was nearing its end.

The shepherd, now old and frail, told his family that he was going for a quick walk before dinner. He made it halfway up the mountain before he had to stop. This walk, which many years ago would have taken him under an hour, had already taken several. By now, it was nearly dark, and the man wondered if he’d make a mistake. Just as he turned around to retrace his steps, someone tapped him on the shoulder.

When he turned around once more, he was face-to-face with Frigga.

Without saying a word, he handed her the bundle of blue flowers, which by now had nearly lost all their color.

The goddess embraced the shepherd before taking his hand. Without speaking a word, she asked him about his life.

How were his kids? His grandkids? Had they learned to weave as well as their grandmother?

The man, no longer weary or worrisome, smiled as he recounted tale after tale of a life well-lived. Frigga listened earnestly, encouraging him to go further down memory lane as she led him the rest of the way up the great mountain.

Frigga (or Frigg) is a Norse Goddess and mother figure that watches over families and children. This retelling was adapted from the Norse tale by Foster and Cummings, A Gift from Frigga. It was inspired by Frigga’s generosity, sight, and desire to weave blessings into adverse conditions.