Sometime around midday on November 12th, 1966, five cemetery workers were digging a grave just over an hour outside of Point Pleasant, West Virginia.
Posted by Theresa Koch
Tags:
tags1 tags2 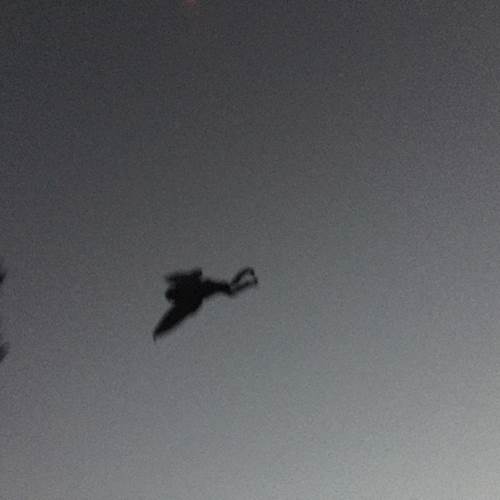 Sometime around midday on November 12th, 1966, five cemetery workers were digging a grave just over an hour outside of Point Pleasant, West Virginia. Despite the crisp Fall afternoon, there wasn’t a cloud in the sky. It was business as usual for the crew as they shared jokes and chatted about their plans for the upcoming holiday season.

But just as one of the men was about to shovel the last bit of earth from the grave, the graveyard was momentarily eclipsed in darkness. The men glanced skyward to see what could cast such a large shadow and assumed that they’d catch a glimpse of a low flying plane or majestic bird. Instead, what they saw would haunt them until the end of days.

Gliding across the clear blue sky was a monster.

According to their police report, this creature was about 7ft tall with an even greater wingspan. And even though the beast showed no aggression toward the men, all five claimed they felt a strong sense of dread.

As if an unknown flying beast wasn’t ominous enough, there was something else that was even more disturbing about Mothman (as he would later be named). According to witnesses, Mothman did not have a head. That means no face. No nose. No mouth. No ears. Just a pair of glowing red eyes, peeking out from beneath layers of dense midnight feathers.

In the four days following the first sighting, hundreds of people contacted the police department, radio stations, and churches to claim that they too saw the Mothman.

One young couple, unaware of the town’s paranormal drama, went for a drive out by the old munitions plant. They called this area the TNT, and there was little to see beyond a fenced-off area with a few bunkers. The couple was enjoying a leisurely drive in the country when they spotted a large winged creature standing on the side of the road. As they approached the figure, they were horrified to see two red eyes staring back at them. No longer curious, the couple sped off.

Their car reached speeds in excess of 100mph, but it still wasn’t enough to deter Mothman. It flew alongside their vehicle with ease, its eyes locked on the terrified couple. Only when the car neared the center of town, did the creature retreat and turn back towards the munitions plant.

Around that same time, a local teacher named Lawrence Grey had an even more sinister encounter. He reported to authorities that around 3 am he woke from a sound sleep to see an enormous owl-like creature standing over his bed. Lawrence said he was unable to move (whether he was frozen from terror or the Mothman’s powerful gaze is still up for debate), and before he could call for help, the creature vanished into thin air.

But with all these scary stories popping up about Point Pleasant’s otherworldly visitor, there’s no proof that Mothman harmed anyone or did anything beyond frightening the townsfolk.

Even more curious was Mothman’s departure. A little more than a month after the first sighting, Mothman left as quickly as he’d arrived.

And his farewell was one to remember. Not because Mothman finally revealed his true intentions or disclosed his home planet, but because his disappearance coincided with the greatest tragedy to strike Point Pleasant.

On December 15th, an enormous suspension bridge connecting one side of the Ohio River with the other, came crashing down during rush hour. The Silver Bridge disaster killed forty-six people and left the small town reeling.

And wouldn’t you know it—not long before the accident, Mothman was spotted perched atop one of the cables that stretched across Silver Bridge.

After that tragic day, there were no more reports of winged creature terrorizing motorists and no more red eyes gleaming in the night—Mothman was never seen in Point Pleasant again.

But that doesn’t mean that the beast is gone.

Although some people believe that Mothman caused the Silver Bridge collapse, others insist that it arrived to warn the residents of impending doom. Since the first sighting of Mothman in 1966, there have been several reports from all over the world of an enormous winged creature appearing just before catastrophic events—most notably, the Chernobyl explosion of 1986, the collapse of New York’s twin towers in 2001, and the earthquake that rocked Fukashima in 2011.