Blogs Legend of The Goddess Brigid

Legend of The Goddess Brigid

If you explore the sacred texts of Irish mythology, listen to Pagan storytelling, or connect with the goddess on the day of Imbolc, you may come face
Posted by Theresa Koch
Tags:
#legend 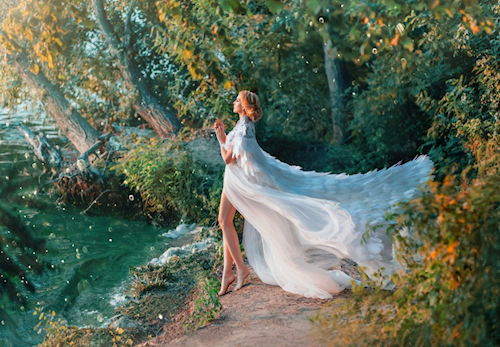 If you explore the sacred texts of Irish mythology, listen to Pagan storytelling, or connect with the goddess on the day of Imbolc, you may come face to face with the goddess they call Brigid. Brigid shares many similarities with the Catholic St. Brigid of Kildare, who is the patron saint of Ireland

In Old Irish her name translates to Exalted One. The name Brigid has been anglicized from the Old Irish Brid in multiple ways. She is also known as Brigit, Brig, or Bride.

Brigid is a goddess of contradiction. She is a goddess of fertility, motherhood, and healing, however she is also a fiery goddess. She rules fire and the flame even though she is the goddess of serenity and water.

In Brigid’s earliest incarnation she was called the Flame of Ireland or Fiery Arrow. Brigid is regarded as a Goddess of the forge and of metal workers. Legend says that when Brigid was born at sunrise there was a tower of flame that reached her to the heavens.

She is known for the protection of mothers and newborn children, and also a goddess of animals.

Bridgid had a menagerie of domesticated animals that she cared for. Of these beasts, two were oxen named Fe and Men. She also was a caretaker for the King of Boars, Torc Traith, and the King of Sheep, Mag Cirb.

Brigid is considered the patron goddess of Poets. In her English retellings of Irish myth, Lady Augusta Gregory describes Brigit as “a woman of poetry, and poets worshipped her, for her sway was very great and very noble. And she was a woman of healing along with that, and a woman of smith’s work, and it was she first made the whistle for calling one to another through the night.”

Brigid appears as a fiery-hair goddess wearing a cloak of sunbeams. She also is sometimes depicted as a triple goddess.

Brigid is considered to be the creator of keening, which is a sorrowful song, weeping, crying, and lamenting for the dead. Brigid can be found protecting the dead and the cemeteries.

Brigid is celebrated on February 1st on the Sabbat that is known as Imbolc.

Halfway between the winter solstice and the spring equinox, Imbolc is a crossroads between the seasons.

In Ireland, Imbolc represents the beginning of the year. Brigid presides over this holy day.

During this holiday offerings are made to waterways and wells (usually small coins or food).

One tradition of Imbolc is to weave a doll from corn or wheat stalks. These represent fertility, luck, and life.

How to Work With the Energy of Brigid:

Pray at the Waterways

On Imbolc, or when you wish to call upon the goddess Brigid, you might consider leaving an offering or a prayer at a waterway to please the goddess of healing. She protects water and wells, and many of her sacred sites are connected to wells.

Brigid is the patroness of Poets. To please the goddess, write a poem or do some journaling about her energy and story. See what messages Brigid may share with you, and then write them down.

Give an Offering to Your Pets

Brigid is known as being a caretaker and protector of domesticated animals. In her spirit, give an offering, prayer, or gift to one of your pets.