Blogs The Myth of Clytie and Apollo

The Myth of Clytie and Apollo

As the hum of Spring drowned out the last whispers of Winter, Clytie the water nymph, found herself restless, bored, and eager for adventure.
Posted by Theresa Koch
Tags:
#myth 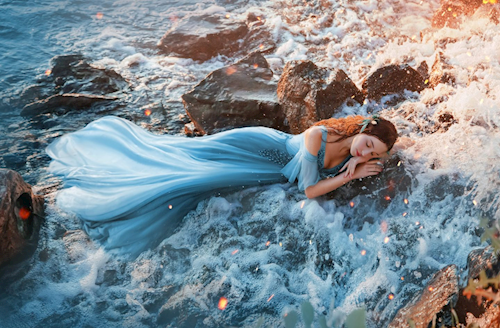 As the hum of Spring drowned out the last whispers of Winter, Clytie the water nymph, found herself restless, bored, and eager for adventure.

As the daughter of Titans, Oceanus and Tethys, the world was Clytie’s oyster. But, like many children who grew up in large families, she felt overshadowed by her sisters. Many of the nymphs, like Electra and Idyia, had left long ago in search of new lives and to start families of their own.

While some of her sisters (which numbered three thousand in total) delighted in mingling with mortal sailors, Clytie had no interest in a human’s fleeting existence.

No, no, this water nymph dreamt of far-off places, visiting the stars, and flying across the sky in a chariot fit for the divine.

Frustrated that she was forced to wallow in the oceans frigid, emotional depths, each morning, Clytie awoke at dawn to greet the sun and bask in its warmth. She watched the meandering path of shapeshifting clouds and admired Apollo’s golden halo as he soared from the eastern horizon to the west.

This went on for several days, then weeks. Eventually, an entire month passed before Apollo took an interest in the sunbathing nymph.

Normally, the sun god did not appreciate people watching him while he worked, but there was something special about her gaze.

Maybe it was the young woman’s indifference, her desire for something greater, or maybe Apollo was just curious about the nymph who was happier on land than water, but either way, Clytie and Apollo soon found themselves inseparable.

Each day, Clytie crawled out of the ocean earlier and earlier, never wanting to miss a moment with her beloved. As Spring inched toward Summer, Apollo’s love burned brighter, and for a while, it was bliss.

However, one morning, Clytie awoke to dark clouds and rough seas. Sensing something was off, Clytie searched the skies, anxiously waiting for her love to appear. But no matter how strong the wind blew, Apollo in his golden chariot remained obscured by the clouds.

Soon, the spirits that road the wind and mingled in the skies began to whisper…

Apollo has fallen in love with Leucothoe, the Princess of Persia.

When Clytie heard the news, she flew into a rage. How dare Apollo cast aside the daughter of Titans!

Clytie dove into the sea and swam to the King’s palace in Persia, where she informed Leucothoe’s father, Orchamus, about his daughter’s affair. The King wasted no time burying Leucothoe in the sand, where she would never feel the sun’s warmth again.

Content with her victory, Clytie returned home and waited for the sun to reappear.

But Apollo was inconsolable over Leucothoe’s death. No matter how much light he sent down to earth, it wasn’t enough to revive his beloved. Not wanting her death to be in vain, he sprinkled a combination of sunlight, air, water, and tears onto her grave. Moments later, a frankincense tree sprouted. Within minutes, it was fully grown.

When the winds began whispering of this new development, Clytie fell deeper into despair. She ripped off her clothes and pressed her body into the earth. She turned her eyes skyward like she had done so many times and begged Apollo to appear and tell her this was all a terrible mistake.

Clytie sat like this for nine days, never eating or drinking, and scarcely breathing. As the ninth day came to a close, a single tear rolled down her cheek. When it reached her feet, roots sprouted from her toes. Her eyes grew wide until they resembled large brown disks. Her hair, which at one time flowed like a golden river, was now a gnarled mess protruding from her head.

For a reason that she still cannot grasp, people now refer to her as ‘Sunflower’ instead of Clytie. They admire her impressive stature and the way in which her face follows the light.

Luckily, the nymph turned flower is not alone. The wind spirits still visit Clytie to share the rumors floating through the ethers.

But, no matter how well-informed the spirits may be, they neglected to mention one important detail—that Apollo’s betrayal of Clytie was likely not intentional but the result of a curse.

The spirits suggest that Aphrodite sought revenge against Apollo for exposing one of her affairs. As punishment, the goddess of love cursed Apollo, causing him to become infatuated with Leucothoe. According to this version of the story, it wasn’t Apollo’s wandering eye but Aphrodite’s meddling that was the true catalyst for the sun god’s grief and Clytie’s broken heart.

This retelling was adapted from the Greek myth of Clytie and Apollo.