Blogs Gryla and the Yule Lads

Gryla and the Yule Lads

This holiday season, as we deck the halls in reds and greens, tie mistletoe above the thresholds, and as the hearth fire transforms the Yule log into
Posted by Theresa Koch
Tags:
#Gryla # Yule Lads 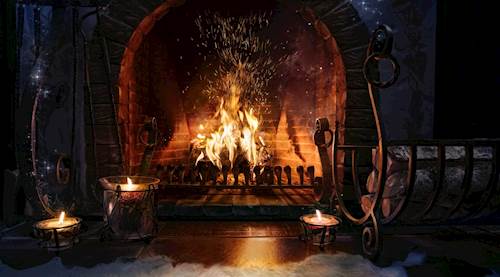 This holiday season, as we deck the halls in reds and greens, tie mistletoe above the thresholds, and as the hearth fire transforms the Yule log into a bed of coals—never forget that Grýla and the Yule Lads might be lurking in the shadows.

After all, there is a shadow side to everything. Especially during the dark months, and even more so leading up to the Winter Solstice, the longest night of the year.

But lucky for us, Grýla and her band of winter tricksters fear the light.

So before I go on, make sure your hearth fire is lit and your teacup full. It’s time for another midwinter story.

Deep in the Icelandic mountains, far from any town or city, lives a witch known as Grýla. Grýla is a giantess who rarely leaves her cave. A hermit, yes, but she doesn’t live alone. She is a mother to thirteen boys and her beloved familiar, the Yule Cat.

Both Grýla and the Yule Cat have peculiar tastes. Instead of eating roasted pig and sipping on homemade wassail like many of us do during the cold months, they fancy a hearty stew, one with a special ingredient—the soul of a child.

If you immediately think of the evil witch from Hansel and Gretal, you’re not alone. The archetype of the bewitching crone who feeds on children is nothing new. But Grýla’s unusual eating habits are likely more of a compulsion, or even a punishment than a desire. For many solstices ago, when Grýla was a mortal witch, she fell on hard times. There was a great famine during that year’s Winter Solstice, and families within her small mountain community were starving to death.

Heartsick from watching her loved ones perish, Grýla and another witch from her coven made a pact that they would survive by any means necessary.

Even if that meant eating their children.

Grýla went first and cooked her only son in a stew. But, after they finished their meal, the other witch broke the pact. She refused to murder her child to ensure their coven’s survival.

Grýla was enraged. Not only with the other witch, but with herself.

She scoured the mountainside looking for the spirit of her son, but it was only when she reached the nearest town that she heard the unmistakable melody of children laughing.

Like many shadow spirits, Grýla fears the light. So she looked for the houses without twinkling lights or smoke billowing from the chimney. If there was no smoke, she knew that there was no Yule log to protect against unwanted visitors. It was these homes that Grýla would visit late at night, searching for her son or naughty children without the protection of family.

The Yule Cat would tag along, of course, but she was only interested in poorly dressed children, specifically those who did not receive a new outfit for Yule.

Today, Grýla rarely leaves her cave unless she is summoned. However, her thirteen adopted sons, the Yule Lads, are more active than ever.

It’s unclear whether the Yule Lads are the spirits of children that Grýla has previously stewed within her cauldron, or if they are simply lost souls that she’s adopted into her family. But either way, like Grýla, the Yule Lads are unwelcome guests during the Yuletide season.

They won’t kidnap children like their mother, but they will make messes, misplace items, break things, and cause mischief in and around the home. And once the Yule Lads find their way into someone’s house (usually by sliding down a chimney that lacks a burning Yule log), they are nearly impossible to get rid of.

Because the Yule Lads are experts at hiding, the only way to ensure that they are actually gone is to summon the only one to whom they will listen—their mother.

Grýla requires an offering if you call her down from the mountain to fetch her boys. Treat her with respect and dignity. She is, after all, the Queen of the Winter Solstice. If Grýla accepts your offering, she will gather up her Yule Lads and head back to her cave, where the happy family will hibernate until the following winter.

Our story ends here dear readers, but I want to leave you with one last thought:

While it would be easy for us to write off Grýla as nothing more than a wicked, cannibalistic witch, if we look closer at her story, we see that in many ways, Grýla is the flesh and blood representation of midwinter.

Historically, the height of winter was the most difficult time of year. If humans didn’t store enough food or wood to last them until Spring, starvation was a very real possibility. And even if our pantries were full, tragedy could still strike in the form of illness or catastrophic weather.

So while Grýla, The Yule Lads, and the Yule Cat share sinister secrets that compliment an even darker history, we hope that their stories serve as a reminder to look out for the lonely, the weak, the young, and the elderly during midwinter and beyond.