Blogs History of the Tradition of Elves

History of the Tradition of Elves

Lost in the romance, fantasy and some would say mystery and myth of Christmas is the concept of elves.
Posted by Theresa Koch
Tags:
#elves 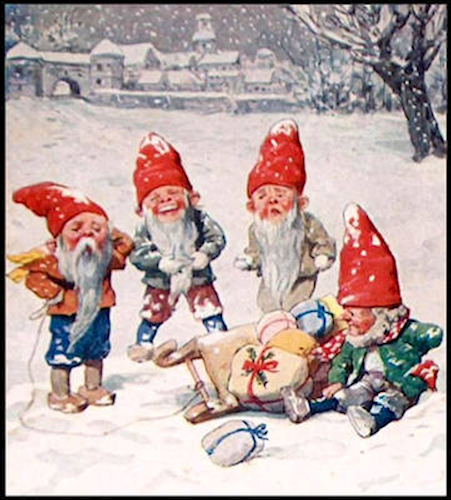 Lost in the romance, fantasy and some would say mystery and myth of Christmas is the concept of elves.

Most folks today think of Santa’s helpers, often in the form of little people, who work at the North Pole busily making toys for good children everywhere. But elves in that vein are a relative recent invention, stemming from 19th century minds full of fantasy as the modern character of Santa Claus was developed in the Americas.

Elves have their origins deeply staked in ancient mythology and their history, unlike St. Nicholas, is completely lacking any relation to deity or the divine. In fact, most elves with ancient pedigrees in Scandinavian folklore are downright naughty, if not outright evil and nasty.

The morphing of elf tradition into Christmas is difficult to explain. Dating back and clearly originating from pagan roots, elf tradition in Scandinavia puts elves into every home and every community and their role year round was to react to activities based upon how good or naughty the inhabitants of a home were. If you were good, they protected you from evil but if you were naughty they would impose a bit of naughty upon you.

These traditions stem from largely seasonal celebrations wherein good luck and rich harvests were celebrated during the winter solstice. The coming dark seasons of winter were considered in the centuries before Christ as times of misfortune, bad luck, death and destruction. If good things happened, gods and elves of fortune had visited to display their approval.

Unlike most traditional gift bringers such as Father Christmas, Odin, or even the Yule Goat, elves were known then as much for their mischievous nature as well as for their other exploits. For example, a child in ancient Europe might have had a nightmare explained away by a parent as having been caused by an elf sitting on a child’s head while he slept.

Centuries of elf tradition inevitably merged with the traditions of Christmas as Santa was assigned a sidekick in some societies. For example, Black Peter is an elf serving Santa in Spanish cultures steeped in Dutch traditions. He was the bad cop to Santa’s good cop, handing out punishment to naughty kids.

Elf enforcers have a long history in ancient tradition. In the alpine countries of Germany, Austria and Switzerland lives the character of Krampus, a character who is more beast like than elf-like, with horns, and a nasty long tongue who roams the streets for the first two weeks of December in search of naughty children to torment.

The association of Santa Claus with elves could well come from the phrasing of his description in A Visit from St. Nicholas, where Clement Moore called St. Nick a “right jolly old elf” and described his sleigh as being pulled by eight tiny reindeer.

Moore’s poem inspired generations of 19th century artists such as Thomas Nast but he also fired the imaginations of other writers and poets. Louisa May Alcott later wrote a book that was called “Christmas Elves” and a popular publication of the times, Godey’s Ladies Book, published art work featuring Santa and his tiny elves.

The late 19th century and early 20th century media explosion fueled the popularity of elves because it seemed to have common immigrant roots during the holiday traditions of merging cultures in America.

From Iceland comes the tradition of the Yule Lads, a group of thirteen elves born of Icelandic folklore tradition steeped in all manner of elf characters. Who they are and what they were like could range depending upon where exactly they came from – they could be mere pranksters or homicidal psychopaths who would eat children. These days the Yule Lads are more like Santa Claus than evil-doers, benevolently bringing gifts to good children everywhere.

These 13 elves come each night in the 13 days leading up to Christmas Eve. There is Sheep-Cote Clod, who is known for his peg legs and propensity for harassing sheep. Another is Stubby, a short elf who steals pans to eat leftover crusts. There is Door Slammer, who does exactly as his name suggests annoyingly in the middle of the night and Sausage Swiper, who likewise does as his name implies. These elves all have a specific date assigned for their coming and if the kids leave their shoes out by the windows on the assigned date they will find small gifts from these elves each day leading up to Christmas.

Movies, television and song all add to the ongoing Christmas morphing of elf characters.

While they never seem to be the star of the show, so to speak, they are almost always popular especially with kids.