As the earth warms and the skies clear, mermaids, nymphs, sirens, and water spirits far and wide come out of hiding.
Posted by Theresa Koch
Tags:
#shapeshifter 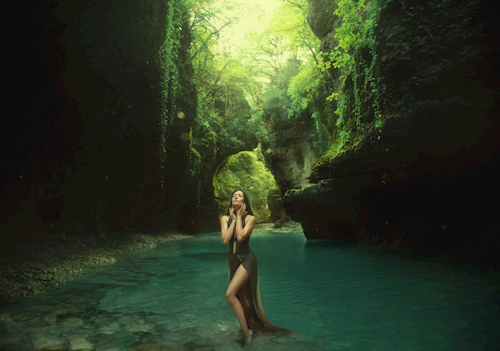 As the earth warms and the skies clear, mermaids, nymphs, sirens, and water spirits far and wide come out of hiding.

They sunbathe on rocks, where they comb their waist-length hair and sing hypnotic melodies.

But, although their faces innocent and their songs sweet, legends warn that we would be wise to keep our distance, especially from the rusalki.

Unlike the traditional merfolk that rusalki are often compared to, these water spirits have legs instead of fins. In Slavic folklore, they walk on land, dance in gardens, and climb trees. But they are still tied to water—whether that be lakes, rivers, or the great oceans. Stories say that the rusalki can only remain on land so long as their hair is wet. They use an enchanted comb to keep their mane damp, for if their hair dries, the rusalki will perish. Their bodies will turn to dust and be swept back into the sea.

Whether the rusalki are local guardians or otherworldly demons will depend on the stories we read. Along the Danube River, they are helpful spirits who venture onto land to dance beneath the moonlight. As the water beads off their pale bodies and makes contact with the earth, it leaves a mysterious rusalki ring (similar to a faerie ring) to nourish the farmers’ fields.

In Polish lore, the rusalki resemble the beautiful yet deadly sirens, who lure men to the water’s edge, only to grab hold of their hands and drag them to a watery death.

In Northern Russia, there is nothing enticing about these creatures. Not song, nor appearance. They are hideous, menacing beings that lie in wait, hoping to ambush humans who are naïve to their enchantments.

Although some see the rusalki as dangerous, others sympathize with them. Many believe that the rusalki are women who died young and are grieving their premature deaths. They likely feel bound by unfinished business in the mortal realm since most rusalki were supposedly drowned, violated, or murdered near water.

However, most will say that the rusalki are still beautiful, even in death. In some stories, they have blond hair, in others brown, and in many, they are shapeshifters who alter their appearance on a whim. Tales suggest that their transformation is a warning, for when their hair turns green, the rusalki are about to attack.

But matter where we are in the world, if there’s water, the rusalki are near. And in June, these water spirits come out to play.

Rusalka Week, also know as Green Week, was traditionally the first week of June. During these nights, the rusalki were in charge. For mortals, swimming was forbidden. But even the humans with feet firmly rooted to the earth still had to watch out for the rusalki. During these days, the nymphs left the lakes and rivers to climb birch trees and hang from weeping willows. They also danced—and if you were gullible enough to join a rusalka ring, you would be cursed to continue until you fell dead from exhaustion.

Despite the sinister warnings surrounding Rusalka Week, most believe that this seven-day event stemmed from one of the many local Summer Solstice celebrations. Although Slavic Pagans focused on fertility and agriculture during midsummer, themes of death and decay were never far from mind. The height of one season was a time to revel in their accomplishments but also a reminder that change was imminent. Legend says that only those courageous or curious enough to wade into the watery depths of the unknown will know the transformative power of nature and the true intentions of the rusalki.