Blogs The Misunderstood Legend of Krampus

The Misunderstood Legend of Krampus 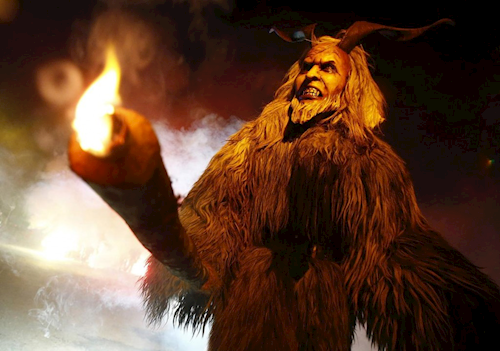 High in the snowy back country of Germany children everywhere look forward to the early December feast day of St. Nicholas, that kindly gift bringer of ancient origin. But unlike other children German kids have not only to be on the lookout for St. Nick – but also for his alleged dark opposite known as Krampus.

St. Nicholas is for the nice kids – Krampus is for those who are challenged with the concept of being nice.

Krampus’ image is anything but merry — or like anything else associated with Christmas.

He is a beast that looks like half a goat with horns and a bifurcated tongue. He is hairy. And when it comes to Christmas, he is all business.

Krampus is an ancient character still celebrated as much as St. Nicholas in parts of Germany. Like all the great legendary figures of Christmas his true origin is unknown and like Santa Claus his image has morphed over time.

His name comes from the German word krampen, which means claw. Some say he is the son of Hel from Norse mythology. Others say his physical features or even the chain and rusty old bells he wears come from other demonic-like creatures of Greek mythology.

Krampus is known for carrying birch sticks, which he uses to beat naughty kids as he tries to kidnap them and take them to wherever it is he is from (likely not a welcoming place). The mere thought of Krampus terrorizes children.

The tradition of Krampus has been taken to wild new levels in modern times in different areas of Austria, Hungary and Germany. Now packs of drunken men dressed as devils roam the streets looking for whatever kind of trouble they can find during Krampuslauf, a kind of holiday free-for-all.

Krampus, like St. Nicholas, has become wildly commercial. He has become a staple of holiday comic books, the star of Hollywood horror flicks, and the anti-Christmas symbol plastered on trinkets, t-shirts, and ugly Christmas sweaters alike.

This modern morphing of Krampus is unfortunate. The truth of the matter is that Krampus is not the anti-Santa. He is not a Christmas villain. He is, in fact, Santa’s partner.

Anciently he worked alongside St. Nicholas to ensure that good prevailed.

Granted, his methods were ever more severe than Santa’s. But Nicholas was a saint – and not one who should have to handle the rebellious and unruly.

The modern misunderstanding of Krampus is not new.

Over the years different political regimes lobbying for the fate of Austria and territories round about often accused Krampus of being the symbol of the devil, in cahoots with opposing forces.

Like it or not, the modern image Krampus has been hijacked from all good intentions he may have enjoyed in folklore. He is cemented now in several cultures as a monster alone with no good to be imposed on anyone by his presence.

He is the personification of fear and the ultimate Christmas nightmare – much to the delight of adults who want to act like the very children Krampus was intended to correct.