Blogs The Girl and the Enchanted Quill

The Girl and the Enchanted Quill

One day, a man set out on horseback to visit his three sisters. However, because he was exhausted from a lifetime of hard labor, he promptly fell asle
Posted by Theresa Koch
Tags:
#story 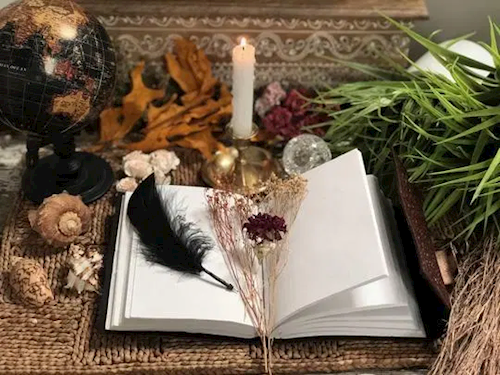 One day, a man set out on horseback to visit his three sisters. However, because he was exhausted from a lifetime of hard labor, he promptly fell asleep while riding. The horse, happy to have a break, wandered from one field to the next, grazing and napping while his master slumbered.

Three years passed and the man was still sound asleep. A crow, who had been watching the man from the moment he nodded off, flew down and pecked the horse in the face. The horse reared up in protest, nearly knocking the man off its back.

When the man woke up and saw the crow hassling his horse, he swatted the bird away and demanded to know why this creature was terrorizing his steed. The crow told the man to check his reflection in the lake, and when he did, the man saw that his beard had grown so long that it reached his belt.

Upon seeing his reflection, the man realized that the crow had done him a favor. Had the bird not startled the horse, who knows how many years the man would have slept.

The man thanked the crow and asked how he’d like to be repaid. The crow explained that he was looking for a partner, someone who believed in the power of words, wishes, and miracles.

The man said he had three sisters but wasn’t sure any would be interested in marrying a crow.

The crow thought about this for a moment and then handed the man a photograph. In the photo, the crow sat perched atop a gnarled branch. His feathers were so dark and glossy that for a moment, the man thought he was looking into the cosmos.

The crow suggested that the man share this photo with his sisters. If any of them would like to meet him, he would love to hear their story.

The man agreed, thanked the crow one last time, and rode the rest of the way to his sisters’ house. When he finally arrived, the sisters asked what had taken him so long. He told them the entire story, and at the end, pulled the photograph from his pocket.

He showed his eldest sister the creature that had saved his life, and asked if she’d like to meet him. She laughed and said she was too wise to spend her life with a bird. Next, he showed the photograph to his middle sister, who taunted him for believing a crow would make a good partner. However, upon seeing the crow’s shiny feathers and kind eyes, the younger sister blushed. She took the photograph to her room and placed it on her desk amidst her most prized possessions—a journal, a bowl of ink, and a tattered stack of books, all fairy tales.

The crow watched all this from the sky, and upon seeing the young woman’s interest, he sent a carriage to her front door. All three women were intrigued and believed that a prince had arrived to woo them, but when they saw a crow emerge from the carriage, the two older sisters laughed. But the younger sister was flattered and blushed a deep crimson red. When she stepped into the carriage, the older sisters insisted on coming along to chaperone their sibling.

On the way to the crow’s castle, the carriage passed through the darkest part of the woods. Eventually, the woods gave way to a forest of lemon trees and then a clearing where the castle sat. The crow invited all three women inside, but asked the youngest sister to join him for tea in the parlor. He told the other sisters to do as they pleased. However, he requested privacy while in the company of his sweetheart. The crow warned the older sisters not to let curiosity get the best of them. The two women scoffed at this suggestion; how could anyone be interested in the activities of a bird?

As the crow and the young woman chatted over tea, the two sisters wandered around the castle. Soon they became bored and decided to spy on their host through a keyhole. They spotted their sister easily, but instead of a crow, she drank tea with a handsome prince!

When the eldest sister saw this, she gasped. The crow, realizing that his true identity was exposed, let out a screech.

All at once, the castle, the carriage, and the prince were gone. The three sisters stood below a tall fir tree, and above them perched the crow. He told them that because they had not honored their word, he would live all eternity as a bird unless his true love could rewrite destiny.

He told the youngest girl that she must go into the city, wearing only the clothes on her back, and beg for work. She must accept whatever job is offered to her, and only when she’s fulfilled her duties would the prince regain his true form.

The older women felt terrible about what they had done, but it was up to their sister to remedy their wrongs. With no hesitation, she headed toward the nearest village, set on breaking the curse that would release her prince.

After going door to door and being turned away each time, the girl’s confidence began to wane. However, just then, the king’s tailor appeared. He asked if she would mind the palace by cooking and cleaning for the royal family, and she quickly agreed.

Unfortunately, the girl did not possess the culinary skills of her sisters. Her passions rested in storytelling, and when her mind wasn’t off in the clouds, she was at her desk, writing about adventure, love, and other wonders of the world. Because of this predicament, each night, she burned the king’s supper and served it to him on dirty china. The king was appalled at her negligence but offered her one last chance. If she couldn’t deliver a dinner fit for a king, he had no use for her.

The maiden looked out the small kitchen window and wept. How could a quiet girl like she, who loved reading and daydreaming, ever save a prince?

Just then, as if the skies were listening, the crow appeared. He told her that as a bird, there was little he could do to help. However, if she thought it useful, she could pluck one of his feathers to use as a quill. He told her that so long as her intentions were pure, whatever she wrote with the quill would come true.

The girl gently plucked an inky feather from the bird. She decided to test its abilities by writing a list of the king’s favorite foods. Instantly, the food appeared on the table. It was cooked to perfection and rested atop shining platters. The king marveled at her talent. He gifted the girl a closet of fine silks and showered her in compliments.

That same night, one of the king’s workers was so impressed by the meal that he snuck into the girl’s room. When she saw the intruder, she thought of the crow. She asked the man to shut the door, and when he turned his back, she grabbed the quill and wrote:

“Let him spend all night at the door, opening and closing it until he is too tired to think of me.”

The man spent all night doing just that. At daybreak, he slipped away, exhausted and humiliated.

The next evening, a decorated hunter wished to try his luck with the young cook. When he appeared at her door, the girl scolded him, explaining that she had just washed the entire floor. If he wanted to come in, he must first take off his boots.

When he bent down to remove his shoes, the girl grabbed the quill and wrote:

“Let him spend all night removing his boots and putting them back on until he is too tired to think of me.”

At dawn, when the sun was returning from its nightly slumber, the hunter sulked back to his cabin.

A potential suitor appeared at the maiden’s door each night until finally, one of them realized that her power came from the quill. They made a plan to whip the girl and steal her magickal tool, but before the men could get their hands on the feather, she wrote one final wish:

“Let them spend the rest of their days whipping one another until they are too tired to think of me.”

Her words came to life, and the men whipped one another from sunup to sundown. Even the king tried to intervene, but after a few lashes from the men, he retreated.

The girl slipped the quill into her pocket and wandered into the garden where the crow was waiting beneath a fir tree. She was sad to see that he was still a bird but didn’t want to show it, so she quickly tucked the feather back into his wing. Although the feather had been her guiding light amidst the dark, her confidence had grown. She asked that the crow share this feather with someone else who needs help writing their story.

But as luck would have it, the moment the crow was reunited with his feather, the curse was broken.

The bird was once again a man, and a grateful one at that. He embraced the soon-to-be-princess and looked to the heavens with wonder. He thought about coincidence, fate, and the blessings born from tragedy. He also wondered how any man could be so lucky to have found a partner, one who writes miracles with nothing more than a feather from an average crow.

This retelling was adapted from the Bavarian folktale by Franz Xaver Von Schönwerth, ‘The Enchanted Feather.’