Blogs The Maiden and the Oak

The Maiden and the Oak

Way back when, when kings were cruel and trees were treasures, a maiden lived with her grandmother.
Posted by Theresa Koch
Tags:
#story 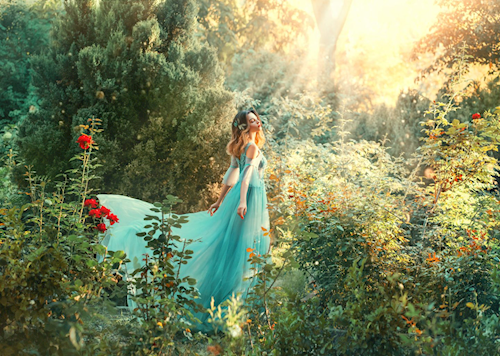 Way back when, when kings were cruel and trees were treasures, a maiden lived with her grandmother.

The grandmother was old and kind. She was a talented weaver who sold her pieces at the local market. Her tapestries were so elegant and exquisite that had the woman lived in another kingdom, she would have become rich off her gift. However, her community was small, and the king’s antics kept the village in a constant state of disarray. So long as the grandmother made enough money to put food on the table, she happily sold her fine garments to the neighbors for whatever they could offer.

Despite a humble existence, the grandmother and maiden enjoyed each other’s company. But they were not free of worry. For you see, the king, a surly man who tortured both friends and foes, had an insatiable desire for hunting.

And it wasn’t stags he hunted, but humans.

The king’s reputation was known far and wide. He reveled in his vile appetite by recounting tales of taunting, chasing, and kidnapping any maiden who dared walk alone. What happened next, he never said, but the following day, the wind would howl, and the trees would shake their limbs in response. When the local shepherd ventured into the woods to investigate, he would find the missing maiden, bloodied and beheaded.

These murders went on for nearly a year before the villagers decided there was only one way to stop the king—they must rid the land of women.

Fathers sent their daughters to live with relatives in faraway kingdoms. Soon after, the mothers followed. Only men were safe from the king’s atrocities—also the Crones, who, over time, had become invisible to most of society.

In a land where women were no longer safe to exist, the maiden rarely left the house. But one day, her grandmother fell ill and could not travel into town to sell her weavings. Even though the girl was terrified of the king, she offered to go in her place.

The grandmother was also scared for the girl, but she had no choice other than to give her blessing. Without the meager earnings from her weavings, the pair would starve. The old woman told the girl to cover herself in a tattered cape, hold her tongue, and tiptoe around the forest instead of taking the shortcut through the center.

“The woods are a place for trees, not humans,” she warned.

The girl did as her grandmother said, but as she neared the boundary that separated the human world from the wild, she saw the king riding towards her.

Without making a sound, she pulled the cape tight across her shoulders and snuck into the woods.

As soon as the maiden stepped beneath the canopy of trees, she felt safe. Careful not to rustle any leaves or disturb the nesting birds, she made her way through the forest. After several minutes of journeying, she heard the faint sounds of music and laughter, a sign that she was nearing the market. But before she could cross the threshold leading back to her world, a giant Oak tree appeared in her path.

The girl knew that this was the tree she’d heard of in stories. It was the reason so many men feared the wild woods and the reason her grandmother requested she refrain from taking the shortcut through the trees. But she’d also heard her grandmother and the neighborhood Crones speak of trees as treasures. Some whispered that this towering Oak was the town’s guardian, a hero bound to this land, responsible for upholding justice, even though it had leaves for fingers and roots for feet.

The maiden wasn’t sure how to act in the presence of such a supreme being, so she did what her grandmother would have done; she smiled and curtsied. She introduced herself and asked if the tree would allow her to pass, for she was on an important errand. A light breeze rustled the tree’s branches, consenting to the girl’s request.

But while the girl was delicately stepping around the ferns and nodding hello to the mossy rocks, the king had been following right behind. He cut through brambles with his razor-sharp sword and cursed the woods for delaying his sinister plan.

The king caught up with the girl, who was bidding adieu to the tree, and the mighty oak blocked his path. Within moments, the great tree grew three times its size. The Oak’s neighbors, the Birch and the Hawthorne, shook themselves awake, groaning as their once straight trunks curved down towards the ground. As if communicating on a frequency that only plants could understand, the trees wove their branches together and blocked out the light.

Then, there was silence.

The girl dared not move. She stood rooted to the earth, breathing in unison with the trees. She inhaled and exhaled as darkness encircled the king. The king swatted and swore at the gnarled limbs, but it was no use. A mighty bough broke loose from the canopy and crushed the king, killing him instantly.

With the king no longer a threat, the trees stretched tall once more. Birds sang, and small beams of light tricked down from the canopy to dance atop the forest floor.

The girl continued to the market, and for the first time in nearly a year, she was free to laugh and chat with her neighbors. When the maiden sold the last weaving for a larger sum than expected, she purchased a loaf of bread, a cup of milk, a small block of cheese, and some fresh ginger root for her grandmother’s evening tea.

On her way home, the maiden realized she’d forgotten to thank the mighty Oak for saving her life. Since the girl had only the tattered shawl and a few provisions from the market, she tore a strip of fabric from her cloak and placed a few crumbs of cheese, ginger, and bread inside. She drizzled everything in milk and tied the bundle to a tree branch rooted halfway between her world and the land of trees.

Even though she longed to thank the Oak in person, after what she saw earlier that day, she knew her message would be delivered. The trees had shown the maiden that community and harmony go hand in hand. They showed her that we’re more powerful when united for a common cause instead of divided over it. They showed her that there are no secrets in the forest—the trees see us for who we are.

And for anyone who might be wondering—yes, the king’s horse also survived. After the king was crushed beneath the Oak, his steed rushed home to the castle and alerted the soldiers that that danger was afoot. The soldiers readied themselves to fight, but when the horse led them to the boundary of the woods, they would go no further.

Because, as we know, the woods are a place for trees, not humans.

This retelling was inspired by and adapted from the Celtic tale “The Vixen and the Oakmen,” by Ruth Tongue.