Once upon a time, a man lived with his three sons on the outskirts of town. They lived well and happily, but the father knew that it was time for his
Posted by Theresa Koch
Tags:
#fairytale#forestbride 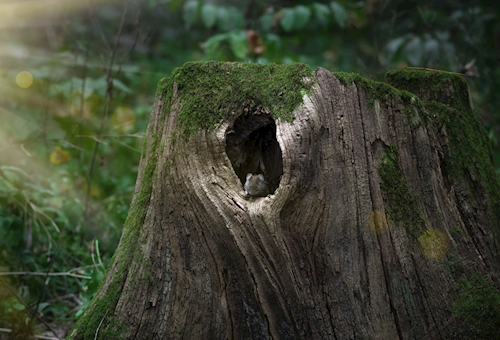 Once upon a time, a man lived with his three sons on the outskirts of town. They lived well and happily, but the father knew that it was time for his sons to start families of their own.

As per tradition, when a young man decides to leave the nest, he must first chop down a tree. Whichever direction the tree pointed upon hitting the ground, that was the direction the man should go.

For rumor says, that is where he will find true love.

The eldest boy went first. He had been chopping wood longer than his brothers and could easily fall a tree in whichever direction he pleased. He chose his girlfriend’s farm. The tree fell easily, and the boy headed towards her house.

The middle son went next. He wasn’t as strong as his brother, but he’d been chopping wood for many years. He felt confident that he could fall a tree towards the city. That way, he would have many options with whom to date. The tree fell easily, and the boy headed into town.

The youngest son had only been chopping wood for a few years. Instead of trying to manipulate the tree to fall a certain direction, he asked that the tree decide for him. The young man hacked and sawed at the trunk for thirty minutes—three times longer than his brothers! In the end, the tree put up quite a fight but eventually fell in the direction of the forest.

What poor luck, thought the boy as he headed toward the thick lot of trees. Surely his brothers would tease him when they heard he was looking for true love in the woods. They would accuse him of choosing a wolf or fox for a bride instead of a proper city girl.

But, despite his concerns, the youngest brother followed the advice of the tree.

He walked for hours, never coming upon a soul. He saw plenty of birds and rabbits, but no humans. Just when he started to feel a chill, and his boots were muddied through, he saw smoke billowing from the chimney of a small hut. He knocked on the door, and a quiet voice called out in welcome.

The man stepped into the house and announced his presence.

“Hello, I am Veikko, son of a farmer not far from here. I venture into these woods because this is where I will find my true love—” the boy halted mid-sentence.

The room was empty.

Empty except for a small mouse that sat perched on the table.

“Why not?” said the mouse. “I am also looking for a sweetheart, and I believe it to be you.”

The young man tried again and again to convince the mouse that they could never be soulmates, for what future would a man and a mouse have?

The mouse was patient and kind. She listened to the human’s worries and assured him that they were meant to be.

And you know the funny thing? The longer the man spoke with the mouse, the more he realized that he enjoyed her company. She was different than the people in his neighborhood and those who lived in the city. She appeared to be genuinely interested in his story and not one bit skeptical about the message from the tree.

To the young man’s dismay, it was getting dark, and he knew that he must return home. He told the mouse that he’d like to see her again and would return shortly. The mouse bid him adieu, and the man sped off in the direction of his father’s farm.

Veikko was the last of the brothers to return home, and when they saw him emerge from the woods, they howled with laughter at his luck.

Once they stopped laughing, the older boys shared stories about their new girlfriends. The eldest brother claimed that his future bride had rosy cheeks and long blonde hair. The middle brother said that his girlfriend was wealthy, and the heiress to an even greater fortune.

When Veikko didn’t say anything, the dad asked if he met anyone. Not wanting to look bad in front of his brothers, he said yes. He added that she wore a grey velvet gown, fit for a princess. The older brothers glared at Veikko, envious of their little brother’s good fortune.

“Good!” exclaimed the father. “Tomorrow, return to your loves and ask that they weave a handkerchief. I want to see the magick that flows from their fingertips.”

The two older boys boasted confidently how well their sweethearts could weave, but Veikko doubted that a mouse could work a loom.

Still, the next day, Veikko returned to the cabin in the forest. The mouse was so excited to see her love that she was taken aback by his somber face.

“I am healthy as a horse,” said the man, “but my father has asked of you an impossible task. He’s requested that you provide him with one of your weavings, a handkerchief of the finest quality.”

The mouse snapped her tiny fingers, and a low rumble filled the house. Within moments, the man and the mouse were surrounded by hundreds of other rodents, all waiting for his sweetheart to give them orders.

“Quickly, each of you gather the finest strand of flax you can find and bring it back to me,” said the mouse.

While the worker mice were off looking for flax, the man and the mouse chatted about their day. Eventually, Veikko grew tired. He fell asleep just as the rodents returned with the flax.

While the man slept, the mice worked. First, they used a spindle to twist the raw strands into soft yarn. Then, they turned to the loom. Each rodent had a job—some pushed the pedals, some worked the wheel, and within a short time, they created a beautiful weaving. It was spun from flax but felt of silk. The mouse knew her future father-in-law would be proud.

Just as her love was stirring from his nap, she tucked the weaving into a nutshell and slipped it into his pocket.

The man, still drowsy from sleep, was concerned that his sweetheart had provided a nut and not a handkerchief, but he did not want to embarrass her. He thanked the mouse and headed home, promising to return.

Like the previous evening, Veikko was the last of his brothers to return to the farm. He arrived just as his father was inspecting the handkerchief from the eldest boy.

“This weaving is sturdy but basic. You and your bride will live a simple and modest life, but you will have to work hard, harder than most,” said the old man.

The boy scowled at this news.

Next, the father examined the weaving from his second-born son.

“This handkerchief is good, better than the last, but it lacks imagination. With this woman, you will live a privileged life, but you will be expected to follow the family business. Any dreams you have of adventure or freedom should be left at the door,” said the father.

When it was Veikko’s turn to share his weaving, his cheeks flamed red. When he handed his father the nut, his brothers snickered in response.

But the boys’ laughter stopped short when the old man discovered a single thread poking out from a crack in the shell. He pulled the thread, and to everyone’s surprise, a blanket so fine that it felt like velvet, emerged from the tiny shell.

The father was so impressed with the weaving from his third-born son that he told Veikko to ask for her hand right away.

“If in a day, a woman can weave a blanket as fine as this, just imagine the magick she will bring into a home over a lifetime,” said the farmer. “Son, you are a good man, and you had better thank that tree for pointing you towards the forest.”

The old man could tell that his other sons were fuming with jealousy, so he made them an offer: If they believed that they had also found true love, and if the women accepted their proposals, he would host a wedding on the farm for all the happy couples.

The next day, the boys set off to share the good news with their future wives.

When Veikko arrived back at the hut and told the mouse what had happened, she cried with joy. When he asked for her hand in marriage, she happily agreed. She told Veikko that she wanted to arrive at her wedding in style, so she put on her nicest gown and snapped her fingers. As if by magic, a tiny carriage appeared. It was made from nutshells and pulled by five black mice. The couple took off towards the farm straight away, and for once, Veikko was not nervous about what his brothers would say.

His sweetheart may look different than theirs, but she was a creature of great talent. She was kind, and he had the inkling that their destinies were intertwined for an important reason…he just wasn’t sure why.

Veikko and the mouse arrived at the creek that bordered the family farm. On the other side, he could see his brothers dressed in suits. The eldest boy was speaking loudly about how he had felled a tree that led him to his true love.

Veikko picked up the carriage and hopped over the creek with ease. When he bent over to rest the carriage back on the ground, his middle brother called out to him, “Veikko, did you bring a mouse to a wedding?”

“She is not just a mouse, but my soulmate,” said Veikko. “Make fun of me all you want, but I love this creature with all my heart.”

Before any of the wedding guests could react to this news, the eldest brother ran and kicked the carriage into the creek. The creek was narrow but deep, and the current was swift. Veikko chased after his love, but it was no use. The mouse in the nutshell carriage disappeared into the water.

Veikko screamed in agony and rushed towards his brother. But before he could get his revenge, their father yelled, “Look there! Do you see that grand carriage headed toward the house?”

To everyone’s amazement, a glossy black carriage, pulled by five black stallions, stopped directly in front of Veikko. A girl wearing a grey velvet gown emerged from the carriage and wrapped her arms around the farmer’s youngest son.

Without her having uttered a word, Veikko knew that his bride had returned—only this time, she was human.

Veikko and his forest bride were married at the old man’s farmhouse just outside of town.

That night, when the newly married couple returned to her cottage in the woods, it too had transformed. The modest hut was no more, and in its place was an enormous castle. Encircling the castle were fields of wheat, fruit orchards, and several houses and shops that made up the quaint forest village.

The village was also surrounded by a wall of tall trees—the same ones that pointed Veikko towards the forest on that fateful night when a young man went in search of true love.

*This story was adapted from the Finnish Folktale, The Forest Bride, by Parker Fillmore. The story of Veikko and the mouse also shows up in retellings that go by the name The Princess Mouse or The Mouse Bride. While this retelling was inspired by the classic Finnish Folktale, I have made several alterations to the original story. I hope that these changes will appeal to a modern audience, without losing the message or the magick that the original author intended.