Tricky and charming, elusive yet beautiful, faeries are the things from which legends are born.
Posted by Theresa Koch
Tags:
#changlings#fairy 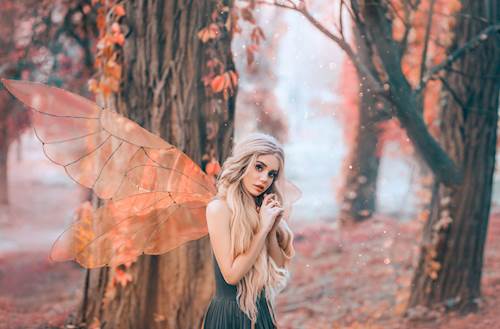 Tricky and charming, elusive yet beautiful, faeries are the things from which legends are born.

Whether we’re talking about Nordic, Celtic, Germanic, or Slavic folklore, there is no shortage of stories about these mischievous creatures. They pop up in gardens, in forests, and anywhere that nature is abundant. And in the old world, people knew better than to mess with the fae folk, for if you did something to displease them, revenge might come in the form of a changeling…

Changelings were faeries disguised as human children. When unsuspecting parents were distracted, the fae would snatch the human child and replace it with one of their own.

But why would a faerie want to swap their magickal life for that of a human?

Many times, if a mother or father fell out of favor with the fae, it was only a matter of time before the faeries sought revenge. Kidnapping children to act as their servants was a way for faeries to balance the scales of justice.

Faeries were also envious of newborns and young children’s purity, and were especially drawn to blonde hair and light eyes. Although faeries were some of the most beautiful creatures in the magickal realm, some people insist that they were jealous of a baby’s natural good looks. They grew stronger by feeding off the love that human children showered upon their parents, whether they be human or otherwise.

And when faeries grew old, they would volunteer as changelings. For in their old age, being coddled and cared for by loving parents was the ideal way to spend their elder years.

How did parents know if their child was a changeling?

Changelings weren’t always easy to spot. In fact, it might take parents weeks or months before they realized that their child had been replaced with a faerie. Usually, the changeling was marked with some sort of abnormality. Whereas the human child was originally in perfect health, the changeling might have an extra toe, a missing finger, a curious birthmark, a chronic illness, a ferocious appetite, or an unfavorable temperament.

But duped parents weren’t without options. They could petition midwives to speak with the fae folk on their behalf, and sometimes even convince the tricksters to return their child. Human midwives were responsible for assisting during all faerie births and therefore acted as mediator between these two realms.

Human parents were also encouraged to baptize their kids at a young age, for unbaptized children were more susceptible to the whims of faeries, trolls, and tricky nature spirits. Dressing babies in red, keeping them out of the moonlight, and hanging iron utensils around their crib were other ways to ward off the fae.

And, if parents still weren’t sure whether their child was human or faerie, they would crush a bowl of eggshells and brew a homemade ‘truth’ potion. If any fae folk stepped near the bubbling elixir of truth, they would be forced to speak and reveal their true identity.

Where did the myth of changelings originate?

Faeries were a tricky bunch, and there’s a good chance that humans have yet to discover their motives or where they first came from.

But looking back through history, it’s easy to see that the story of changelings might represent a family’s dedication to survival. Every family member, whether they be young or old, was responsible for supporting the household. Children with mental or physical disabilities, or who didn’t fit in with societal norms, were considered a burden in an already difficult era. If families were unable to care for a child for whatever reason, it was easier to label them a changeling instead of allowing that child to drain their precious resources.

Keep in mind that nearly every retelling of faerie folklore casts changelings in a different light. Choose the one that speaks to you.