The Phoenix teaches us that sacrifice is acceptance. An acknowledgment that we’ve outgrown a nest that once felt so cozy and warm.
Posted by Theresa Koch
Tags:
#symbology # Phoenix 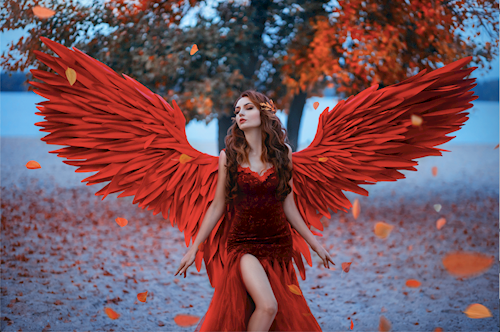 In The Red Book of Animal Stories, a 19th-century collection of tales about mystical creatures and their habits, author Andrew Lang says that:

“…the bird Phoenix cometh and burneth himself to ashes. And the first day after men find in the ashes a worm, and on the second day they find a bird, alive and perfect, and on the third day the bird flieth away. He hath a crest of feathers upon his head larger than the peacock hath, his neck is yellow and his beak is blue; his wings are of purple colours, and his tail yellow and red in stripes across. A fair bird he is to look upon when you see him against the sun, for he shineth full gloriously and nobly.”

Yet, beyond Lang and other storytellers with ties to the old-world, nowadays, there aren’t many people willing to tantalize curious ears with tales of the Phoenix.

No, no, for those types of stories, we’ll need to find adventurers from days gone by. The explorers who traveled on foot to see Heliopolis. The voyagers who swear they know the whereabouts of Hyperborea, the mystical land from Greek myth. The ones who admit to knowing the way to the otherworld, but won’t say why or how a mortal might end up there.

And after we gather these people and convince them to speak of the beast that is both ancient and ageless, we’ll likely start to wonder—are we still talking about the same thing?

The Phoenix, the winged messenger whose metallic plumage was a sign of divinity, resurrection, and smelled of myrrh?

The creature that dies, only to resurrect itself nine days later at the end of a five-hundred-year cycle?

Because for every person who tells us the Phoenix burns to ash after five centuries, there is another who insists that each day, the bird is born from the first rays of light. They say it arrives on our altar at the break of dawn, wise and watchful despite being only moments old. Its demeanor, that of an old soul, perhaps a consequence of rapid and perpetual reincarnation.

We could spend several lifetimes contemplating the origin of such a creature, but it’s what echoes in the heart of the Phoenix we would be wise to commit to memory:

That which makes us different is not a burden but a gift, for it also makes us strong.

And fortunately, there’s nothing we need to do to access this gift because we’re born with it. That strangeness. The part of our spirit that makes us stand apart from the crowd, sometimes intentional, but likely not.

The Phoenix reveals that we need not rid ourselves of oddities and mysteries to live a ‘normal’ existence. Ordinary does not mean authentic. Originality is anything but mundane. The Phoenix is atypical. It’s a blessing born from the fires of evolution.

Some people call this creature the King of Birds and compare its divinity to that of Apollo, Greek God of the Sun.

The likeness is there. Both are framed in gold and soar through the heavens, but the Phoenix’s relationship to death, rebirth, and the number nine alludes to another archetype—the Triple Goddess.

The Goddess, whether she appears as Gaia, Mother Nature, or in another form, speaks to sacrifice as a way to move beyond the threshold. This is the doorway to the otherworld. The place where dreams take shape and what was previously intangible can now be felt in the palm of the hand.

We see these sacrifices reflected in the seasons, plants, and the animal world.

Summer fades to Autumn. The once fragrant flower turns brittle and drops her seeds. Animals sacrifice their bodies for their young. And in the case of the Phoenix, a pile of soft feathers ignites and burns to ash when we least expect it.

Like all the elements, fire demands respect but not fear.

Fire is a filter—an amendment. When we walk through the flames, we sacrifice habits and patterns that until now, we thought we needed to survive and thrive.

The Phoenix teaches us that sacrifice is acceptance. An acknowledgment that we’ve outgrown a nest that once felt so cozy and warm.

It’s also surrender. It permits us to weave a story that intertwines victory with disappointment. Self-acceptance with self-denial.

It will be beautiful because it’s honest, it’s strange, and it’s ours.

The Phoenix says that when we tire of one version of ourselves, there’s another waiting.

Messages from the Phoenix:

Don’t hesitate to shed layers. There’s magick beneath the surface.

When was the last time you did something for the first time? If it’s been a while, consider volunteering for a cause or signing up for a class or lecture that exists outside your realm of knowledge.

Set aside some time to meditate in front of a candle or a small bonfire. What images can you derive from the flames?

What feathered friends have appeared in your life lately? Do birds get louder or quieter while in your presence? How often do you speak with them and share pieces of your story?

When you look back on your life, how many versions of yourself have you met? Are there any that you especially enjoyed? If there’s one you’d like to know better, consider reconnecting with them through ritual, meditation, or another avenue. Be sure to share anything that was left unsaid when you last met and reflect on how it feels to be reunited.

The death of anything is an ending, and there’s no escaping it. But the finality of one thing (be it a situation, a mindset, or way of being) is nothing more than a prequel to another. Embrace the flames and be reborn.