Blogs Legend of The Snow Queen

Legend of The Snow Queen

If you happen to pass through the North Pole, and through the gates of the Aurora Borealis, or if you are traveling across the tundra and see a woman
Posted by Theresa Koch
Tags:
#snowqueen 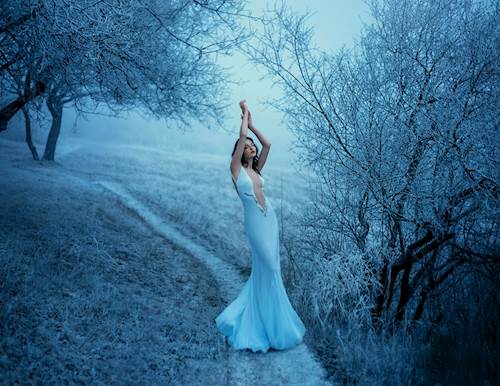 If you happen to pass through the North Pole, and through the gates of the Aurora Borealis, or if you are traveling across the tundra and see a woman in a white sleigh wearing furs, you may happen to stumble upon the Witch they call The Snow Queen.

The Snow Queen conjures memories of children’s books, glittery snow, and the promise of adventure.

The Snow Queen was popularized in a famous story by Danish author Hans Christian Andersen.

Andersen writes, “The walls of the palace were formed of drifted snow, and the windows and doors of the cutting winds…There were more than a hundred rooms in it, as if they had been formed with snow blown together.”

The entrance to the home of this winter witch is wherever the aurora borealis is found.  She is depicted as a harsh and cruel woman, as cold as her surroundings.

In this very famous story, Gerda and her friend Kai attempt to defeat The Snow Queen with the power of love. To do this, Gerda must battle witchcraft, evil, and the iciest cold ever known.

There are many popular elements of classic folklore present. Gerda sees the shadowy figures on their way to The Wild Hunt, and an old crone tries to capture Gerda on her way to search for The Snow Queen.

Many believe that The Snow Queen was created from the Norse myths of Skadi, or from the tales of Hel.

The story of The Snow Queen is that of the very symbolic pagan tale of the struggle between spring and winter.

However, winter as a symbol of evil is not at the core of witchcraft. Nature is not inherently good or evil, and instead the cycles should be honored each in their different way.

C.S Lewis would later recreate The Snow Queen in The Lion, The Witch, and The Wardrobe. In this tale, it is always winter and never Christmas, and Disney would again draw from the deep well of folklore in their creation of Frozen.

How to Work With the Energy of The Snow Queen:

The Snow Queen, though depicted as evil, teaches us the inherent powers of the seasons. Winter must give way to spring and spring must give way to winter. This is the way the cycles work. How can we integrate these cycles into our everyday lives and honor them. If we’re feeling a little cold this winter, how can we warm ourselves with the knowledge that the times of darkness are important too?

Explore the Power of Love

Gerda and Kai right the natural ebb and flow of the seasons when they defeat The Snow Queen through the power of love. What can love teach you in your own life? Instead of meeting someone for battle, how can you show up with a loving heart and melt what is frozen inside of them?

Popular culture and fairytales come from deep roots of storytelling and folklore. It’s so wonderful to experience the overlaps in the story. What might you find out if you dig back through lineages of tales? Where did your favorite stories and characters come from?