Blogs The tradition of hanging Christmas stockings was introduced by St. Nicholas, the patron of children

The tradition of hanging Christmas stockings was introduced by St. Nicholas, the patron of children

Ahhh, the coziness of relaxing by the fireplace with a cup of tea and cookies while looking at decorative Christmas stockings hanging down, reminiscin
Posted by Theresa Koch
Tags:
#Christmas#stockings 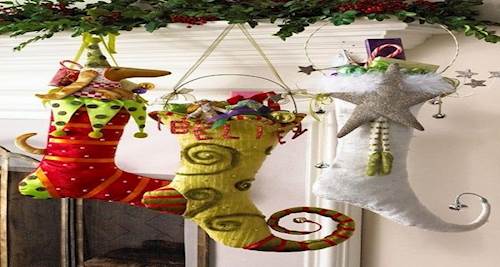 Ahhh, the coziness of relaxing by the fireplace with a cup of tea and cookies while looking at decorative Christmas stockings hanging down, reminiscing about carefree childhood memories of when being a good boy or girl during the year was rewarded with goodies stuffed into those large festive socks.

The hanging of stockings by the fireplace is one of the most popularly observed Christmas customs. However, the fireplace is not the exclusive option–people who don’t have one hang their stockings on doorknobs, windowsills, or bedposts. Don’t worry, when Christmas Eve arrives, Santa Claus will find them anyway! But what was the origin for this long-held tradition? While there is no single account that defines it, there are a few legends that illustrate the custom of hanging Christmas stockings.

The tradition of Christmas stockings originated in the generous deeds of a nobleman named Nicholas who was born in 280 A.D. in Asia Minor. Nicholas dedicated his life to following the principles of Jesus Christ, using his wealth to help impoverished and suffering people. He became the Bishop of Myra in his young years, and was immensely popular for his kind, generous heart. Living a lifetime of celibacy, Nicholas never married or had children, but he loved children and thus often regaled those who lived in his hometown. This practice provided him with the epithet “the gift-giver of Myra.” Interestingly, his nobility never prevailed his modesty, so he always gave his presents late at night in order to protect his identity. He didn’t like the children to know who their patron was, so they were often told to go and sleep or otherwise he wouldn’t visit them.

One of the legends regarding Christmas stockings takes us to a small village where the destiny of the once wealthy merchant and his daughters changed overnight when they fell into poverty. The father was worried about the future of his children and afraid that he wouldn’t be able to provide dowries for their marriages in the future. At that time, this meant an almost humiliation due to the impossibility of wedlock. While the now-famous St.Nicholas traveled, he passed through the village and heard the sad story about the merchant and his daughter, learning from the locals that he would not accept any gifts of charity.

One night, while he was riding his gorgeous white horse, he stopped at the merchant’s home and threw three bags filled with gold coins down the house’s chimney. The bags fell down right into the girls’ stockings which were hung by the fireplace mantle to dry. The next morning, the daughters and their father discovered the coins and jumped for joy.  The young women married happily and prosperously, so, obviously, their story had a happily ever after. The details of their story spread among the villagers, whose children began hanging their stockings by the fireplace, hoping to receive presents from St. Nicholas.

Another amusing legend that explains the tradition of Christmas stockings derives from the Dutch folklore. In the Netherlands, Santa Claus, called “Sinterklaas” in Dutch, and his fellow assistant Black Pete or “Zwarte Piet” annually dock in the harbor of a different city. When they disembark, Sinterklaas and his pal travel around upon a white steed and a mule. The children impatiently wait for their arrival and prepare special treats of hay and carrots which they place in their wooden clogs.On the day of the arrival, the horse, the mule, and Sinterklaas would enjoy the children’s treats and then reward their devotion and care with small presents such as candies, ornaments, nuts in shells, miniature toys etc. When the Dutch settlers immigrated to America, they introduced Americans to many of their traditions. After a while, Sinterklaas became known as Santa Claus and, allegedly, the wooden clogs were replaced by stockings. Today, numerous children around the world await the chunky, white-bearded man’s visit to their homes, and when they see the stockings, they know that the joy of finding new small presents inside is getting closer with a day.