Blogs The Myth of Zephyrus and Hyacinth

The Myth of Zephyrus and Hyacinth

n Ancient Greece, during the late Spring and early Summer months, Spartan warriors sparred with their comrades in the grassy fields surrounding the ki
Posted by Theresa Koch
Tags:
#myth 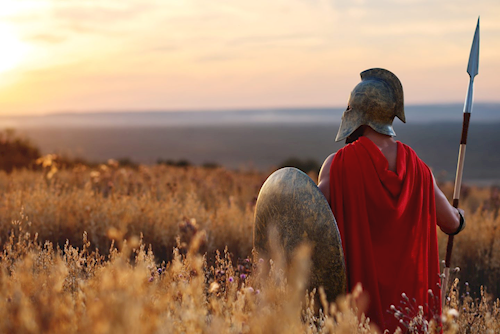 In Ancient Greece, during the late Spring and early Summer months, Spartan warriors sparred with their comrades in the grassy fields surrounding the kingdom. As the sworn protectors of Greek society, the Spartans were courageous, strapping young men. Each day, they trained for hours beneath the midday sun, and only when their combat drills were finished did they retreat to the shade to study their books.

Hyacinth, a Spartan prince (and a beautiful one at that), was especially fond of the arts. Although he was a skilled fighter, he adored music, literature, and admiring the vegetation that sprouted year after year—especially the wild plants that thrived without the help of mortal hands.

As the story goes, one day, the sun god, Apollo, entered his golden chariot for the daily voyage across the sky. This was sometime in June, so the sun was nearing its peak. Apollo enjoyed watching the Spartans train from his heavenly throne and would regularly test the mens’ commitment by burning brighter than the average mortal could withstand.

One by one, the men would begin to sweat, pant, and eventually withdraw to stand beneath the nearby trees. But there was always one man who never wilted, no matter how brightly Apollo burned.

Apollo was mesmerized by this young prince. He had never met a mortal who could withstand his light and believed their destinies were intertwined.

Luckily for the sun god, Hyacinth was equally taken by his admirer. At first, their union was bliss. Apollo taught Hyacinth how to play the lire and shared his highly guarded hunting secrets. The duo practiced archery together, reflected on the seasons, and took part in an array of athletics—including Apollo’s favorite, the discus throw.

Unfortunately, it was Apollo’s love of the latter that would lead to his eventual heartbreak.

Because what Apollo had failed to notice was that Zephyrus, the god of the west wind, had also been watching Hyacinth train beneath the midday sun. Zephyrus knew that the sun god enjoyed teasing mortals with his harsh rays, so in turn, the west wind sent gentle breezes to aid his beautiful prince, leaving him cool and composed while his comrades searched for shade.

Hyacinth was aware that Zephyrus (along with several other gods and mortals) longed for his heart, but Apollo’s glow hypnotized the prince. Hyacinth did not give any attention to Zephyrus and his generous gifts, and eventually, the rejection became more than the west wind could bear.

One fateful day, as Zephyrus swirled around the body of his would-be-lover, Apollo invited Hyacinth to a friendly discus-throwing competition.

After a few practice throws, Apollo flung the discus toward the heavens with all his might, splitting the clouds in two.

The lovers kept their eyes skyward, looking for the return of the flying saucer. But just as the discus reappeared and plummeted to earth, the west wind shifted course.

Instead of connecting with the grassy field as Apollo had intended, Zephyrus blew so hard and with such rage that the discus struck Hyacinth in the head.

Although Apollo was a skilled healer, not even he could save Hyacinth from the whims of a jealous god. As blood trickled down the injured prince’s head and pooled atop the earth, Apollo petitioned the Fates to keep Hyacinth in the land of the living. The prince’s death was imminent, but Apollo refused to let his beloved reside anywhere devoid of light.

As the sun god wept and cursed the spiteful Zephyrus, beautiful flowers sprouted from the blood-soaked earth. As soon as Apollo touched the velvety petals and inhaled the flowers’ sweet scent, he knew the Fates had granted his request. Content with this arrangement, Apollo named the divine flower after his Spartan prince, Hyacinth.

Most of the time, the story of Hyacinth and Apollo ends with tragedy, but other versions insist that Apollo ultimately resurrects his beloved.

In Ancient Greece, Hyacinth’s demise and revival were celebrated by Apollo’s cult in an annual three-day celebration called Hyacinthia. This festival took place in June and was symbolic of seasonal plants and agriculture. Because of Apollo’s connection to the light half of the year, Hyacinth blooms allude to Spring, partnership, and the resilience needed to survive, even in the heat of Summer.

This retelling was adapted from the classic Greek myth of Zephyrus and Hyacinth.