On the night of January 6th, on Three Kings Day, of the Feast of Epiphany, if you look to the skies you may see the witch on her broomstick, the witch
Posted by Theresa Koch
Tags:
#LeBafana 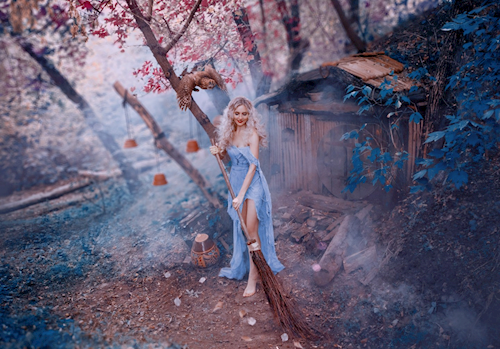 On the night of January 6th, on Three Kings Day, of the Feast of Epiphany, if you look to the skies you may see the witch on her broomstick, the witch they call Le Befana as she soars across the night giving gifts. .

Otherwise known as The Christmas Witch, Le Befana comes to us from Italian traditions that are thousands of years old, but are still celebrated today.

Le Befana lives alone in her home, where she passes the days keeping house, cooking delicious meals, and sweeping up.

The story of Le Befana is an example of where folktales and pagan traditions and where stories of the bible intersect.

And as they arrived to the village, there was one woman who did not join the wise men as she was caught up in her housework (like all good witches, probably performing a sweeping ritual at the end of the year).

The next day, after much contemplation, Befana realized her error and ran after the wise men with her broom. But it was too late; the Three Wise Men had already departed.

Now, Befana flies on her broomstick house to house delivering the gifts that she carried to give the baby Jesus but to the good girls and boys of the land instead.

Legend has it, if you leave water out to be blessed on January 6th; the water is blessed and can be used in ritual settings.

How to Work With the Energy of Le Befana:

Le Befana knows the power of giving a gift. Is there someone in your life you can give a gift to? Gift giving doesn’t need to be luxurious or extravagant, it just needs to be intentional and thoughtful. Maybe you can buy a coffee for the person behind you in line or give a favorite book to your neighbor. How can you embody the gift giver in your daily life?

Travel Towards a North Star

The North Star is a symbol of hope. How can we work with the landmark of the North Star? Where do we set our eyes when we look ahead? Where is our north node on our birth chart? What guides us home or to our greater purpose? Identify your north star, and then brainstorm a few ways to work toward it actively.

Traditionally, in spell work, a broom called a besom broom is handmade from a tree branch. Using the broom is a symbolic tool for cleansing the space. The bristles of the broom don’t generally make contact with the floor. But removing negative energy and energetic clutter, can be ritually performed and cleansed with the broom.