If you open a book of folklore from Slavic and Russian traditions, you may come across the fairytale of the witch they call The Snow Maiden.
Posted by Theresa Koch
Tags:
#Snow #Maiden 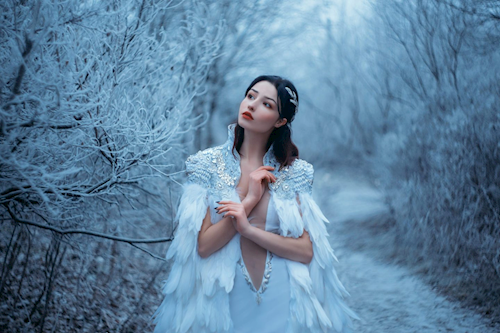 If you open a book of folklore from Slavic and Russian traditions, you may come across the fairytale of the witch they call The Snow Maiden.

The tales of The Snow Maiden vary across tradition, however she is often seen with pale skin, red lips, a crown, and a cape, and if often celebrated around the New Year.

One of the most famous stories of The Snow Maiden goes as such….

The snow maiden was formed from magical snow and her parents in their cottage in the woods one morning while they were cutting snow as Father Frost watched on.

They called her “Snegurochka,” or the Snow Maiden. The desire for a child between the man and woman was so strong that The Snow Maiden’s eyes began to come to life, and she was transformed. Atop her head was a tiara, and across her shoulders was a cape. Her skin was as sparkling as the snow itself.

The man and the woman took their newly formed daughter home. Their daughter didn’t speak much, but she was always kind, respectful, and helpful to her parents. However, her mother could tell that she was lonely.

The Snow Maiden met Lel, a young shepherd who played the flute. The pair became inseparable.

As spring bloomed across the land, Father Frost came to The Snow Maiden to warn her about the change in seasons as well as her newly formed relationship.

As she left to meet her love, she came upon him on the edge of the wood where he was playing his flute. The music was so beautiful that she began to cry, and as she ran toward him, she forgot her true father’s warning and began to melt.

The young man carried the devastating news to the couple in the cottage. However, Father Frost had an idea, he brought her spirit to the frozen lands of the North where she was able to become her human form again.

Legend says that The Snow Maiden and Father Frost spend their days together in the North, but when the land turns to winter they return to visit the lands of the south and bring gifts each New Year.

How To Work With The Energy of The Snow Maiden

The Snow Maiden teaches us to embrace who we truly are. When she is able to head to the lands of the north, she is able to regain her form. How can we feel more like ourselves with the help of Father Frost and the archetypes of winter? How can winter allow us to feel more free?

We are currently in the early days of 2021. How are we embracing the Gregorian Calendar? How are we building on the lessons of 2020? How can we make sure to mark the passing of time to help us become our more authentic selves?

How can we work to experience full love for our families, our friends, our partners, and ourselves? The Snowmaiden feels deep love even though it causes her to melt. How can we see vulnerability as a positive?