Blogs The Girl who Spoke in Diamonds

The Girl who Spoke in Diamonds

There once was a miserable widow who lived near the edge of a forest.
Posted by Theresa Koch
Tags:
#story 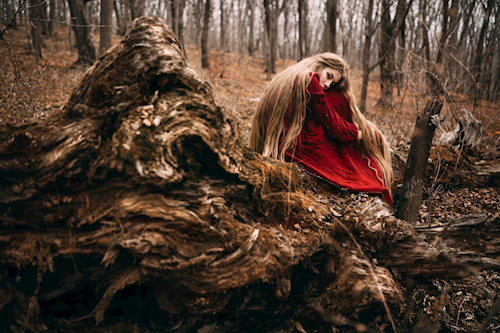 No, she was miserable by choice. The widow had a home, good health, and everything she needed to live well, but instead of focusing on her good fortune, she only saw that which she lacked.

The widow’s eldest daughter was just like her mother. She was lazy, rude, and complained incessantly about their old house and worn clothes. But the youngest girl had taken after her father. She was kind, helpful, and even looked like him, with a soft, round face that beamed as bright as the sun.

Even though the little sister was responsible for cooking, cleaning, and refilling the water pails twice per day, the girl never once complained. She found the simple things comforting, plus she took pride in caring for the family since her father’s death.

One morning, when she went to fetch water for their morning tea, the young girl spotted an elderly woman trying to drink from the spring. The old woman didn’t have a pail or even a cup, and the water slipped through her gnarled fingers before it reached her lips.

When the woman saw the girl carrying an empty pitcher, the crone asked if she might fetch her a drink.

The girl was happy to oblige and wasted no time filling her pail. She told the woman to have a seat and even held the pitcher to her lips so as not to waste a single drop.

When the woman’s thirst was sated, she thanked the young girl and asked about her life. The girl smiled as she told her new friend about her father, mother, and sister. Despite the girl’s cheery demeanor, the crone looked less than pleased.

As the sun shifted higher in the sky, the old woman said she must return to her home in the woods, but not before she left the young girl with a gift for her kindness. She pressed a finger to the girl’s lips and said from that day onward, her words would be accompanied by something equally as beautiful.

The girl thanked the mysterious woman and returned home, where her mother and sister were impatiently waiting. Instead of being concerned, the two were angry. They accused the girl of spoiling their breakfast, the day, and even the rest of the week.

The girl was apologetic and explained that she lost track of time while tending to an old woman at the fountain. As the words tumbled from her mouth, they were accompanied by diamonds and flowers. The widow was amazed by her daughter’s new gift, and quickly gathered the loose crystals and arranged the flowers on the table.

The next morning, the woman told her eldest daughter to fetch the water. She instructed her to do exactly as her sister had, that way, she would also be blessed with endless riches and beautiful things. The daughter complained about the long walk to the fountain, but she desired fine gowns and linens that outshined those of her neighbors, so she finally agreed.

When the eldest daughter arrived at the fountain, she saw no mysterious woman like her sister described. Instead, she saw a princess dressed in silks lounging by the water’s edge.

The princess greeted the girl, who was immediately embarrassed by her common clothes. She ignored the princess and instead began filling her pail to hide her shame. When the girl turned to leave, the princess asked if she would be so kind as to share a drink with her. She said that she’d been walking all morning and had gotten lost. If she could just have one sip of water, she would have enough strength to find her way home.

The girl rolled her eyes at the princess. How demanding, she thought. But, she agreed. The girl knew that witches and magickal folk were shapeshifters, and was beginning to think that this was a test. She did not want to risk returning home without the ability to speak in diamonds.

The girl tossed the bucket by the princess’s feet, sloshing water over the rim. She did not offer to hold the pail to her lips, and after the princess took a single drink, she snatched the bucket away.

The princess (who was no princess or witch, but a faerie with a clever mind) asked the woman if she would like a gift that mirrored her kindness. The girl eagerly agreed. The princess pressed a finger to the girl’s lips and said from that day onward, her words would be accompanied by something equally as beautiful.

In her haste to get home, the girl spilled every drop of water from the pail. Her mother was waiting by the door, but when the daughter began telling the story of the spoiled princess by the fountain, it wasn’t diamonds or flowers that tumbled from her mouth—but snakes and toads.

The widow and the eldest daughter turned to the little sister, who was quietly cooking breakfast. They accused her of trickery, witchcraft, and kicked her out of the house.

Heartbroken, she fled to the woods in search of the mysterious woman from the fountain. She planned to beg the crone to reverse the spell and show her sister how to speak in flowers instead of toads.

But instead of the old woman, she stumbled upon a king who on his way back from a neighboring kingdom. When he introduced himself to the maiden and asked her story, he was mesmerized by her words and kind nature. He invited her back to the castle, where she met and fell in love with his son, the prince. Although she had more riches than anyone around, she retained the humble, kind spirit of her father.

From that day onward, the new bride spent nearly every day wandering the hillsides and being of service to any villager in need. Except for her mother and sister (who still refused to speak to her), everyone in the kingdom was blessed with riches and flowers until the day of her death, many, many years later.

*This retelling was adapted from the French folktale