Blogs The Myth of the Flower Elves

The Myth of the Flower Elves 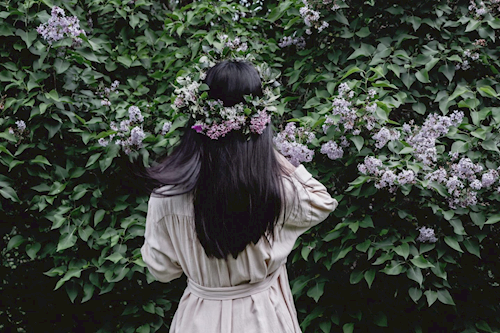 A very long time ago, when humans and spirits still intermingled freely, a Chinese scholar decided to leave the city. As he packed his bags and said his goodbyes, the man’s colleagues tried to convince him to stay. They were surprised that someone as intelligent as he would leave a luxurious home in the city for a tiny cottage in the woods.

The scholar ignored their snide remarks. He longed to breathe the fresh countryside air and walk barefoot in the garden. He’d been blessed with a comfortable life but had grown tired from a lifetime dedicated to academia. As he inched closer to his golden years, he wanted nothing more than to discover new perspectives, ones that were only available to those who sought wisdom in nature.

When the scholar finally arrived at his cottage, it was more beautiful than he’d imagined. His home was encircled by meadows of flowers in every shade of pink, yellow, and red. Among the blossoms grew an assortment of peaches, plums, and pomegranates. In the very center sat a large willow tree, which offered the perfect amount of shade and shelter from the harsh sun and unfavorable winds.

After spending several summer evenings drinking wine and watching the moon from his porch, the man was amazed to see a young woman emerge from the flower fields. Since he was too stunned to speak, the woman introduced herself and explained that she was his neighbor. The man had no neighbors, but he was too mesmerized by the maiden to argue.

She went on to say that she and her sisters were on their way to see their aunts, and would it be alright if she returned the following evening with her entourage? She said that her sisters were eager to meet their new neighbor, so long as he welcomed their company.

The man quickly agreed, and the woman bid him farewell. Instead of heading toward the main road, she walked back into the flower fields. The man watched as her figure faded from sight, eventually being swallowed up by the night.

As promised, the following evening, just as the moon rose, the maiden returned with her sisters. The scholar had been preparing for his visitors all day, and when they arrived, the table was overflowing with food and wine. The women didn’t come empty-handed. Each one offered their host a basket made from willow branches, full of flowers and fruit. Their thoughtful gifts humbled the man, and although he had not taken a sip of wine, he felt intoxicated from the sweet floral scent that followed the maidens.

After he showed his guests to their seats, the scholar asked where these women were from. Were they visiting from the great palace atop the moon? Or were they heiresses to a nearby estate?

The women blushed. They were flattered to be mistaken for princesses, but instead of explaining where they came from, they shared their names.

Just as the women started telling the story about why they were on their way to visit their aunts, the housekeeper appeared. Eighteen elderly women trailed behind. Thanks to the cool breeze that followed, the scholar understood that these older women were not mere mortals.

The maidens quickly rose to their feet to welcome the crones. They cast their eyes downward, curtseyed, and introduced their host to the zephyr aunts.

Despite the arrival of eighteen unexpected guests, the scholar did not want to be rude. He set eighteen additional place settings and invited the new arrivals to the table.

Compared to the four maidens, the aunts were quite talkative. It was nearly impossible to get a word in with all the chatter, and as time went on, the night got colder, and a chill engulfed the room. The aunts were also rather clumsy, and when one of them spilled a goblet of wine on Punica’s dress, the young woman leapt up in anger. Even though the wine was nearly the same color as Punica’s gown, the maiden was enraged. Despite the sisters’ attempts to calm Punica, she scolded the old woman for her carelessness.

Upon hearing Punica’s cruel tone, all eighteen aunts fell silent. They rose from their chairs and cursed the sisters, promising that they would pay for their lack of hospitality.

At that moment, the winds picked up, swirling around the table and knocking over every wine goblet and basket of fruit. The man watched as the floor became littered with remnants of the night’s feast.

When he looked up to confront the aunts, they were gone.

Bewildered by what had just occurred, the man looked to where the maidens sat only moments before, but they were also gone. He barely caught a glimpse of one of them in the flower fields, moments before the night swallowed them up.

The following evening, the maidens returned to the man’s cottage. The women were embarrassed about what had happened at dinner. They explained that they did not live in a castle on the moon or in a nearby palace—but in his garden. They were flower elves. The maidens told the man they were the sworn protectors of any plant that blooms, but they were often tormented by the zephyr aunts and the windstorms that followed them.

Since they’d offended the wind spirits, the maidens knew that a storm was imminent. They told the man that the East Wind was coming, likely sent by the aunts to wreak havoc on his garden.

But the maidens had a plan. They hadn’t arrived to complain, but to strike a deal with the aging scholar.

They explained that each year, if a small red flag were placed among the flowers on New Year’s Day, they would be protected from even the strongest of wind. But, since New Year’s Day had already passed, the flower elves explained that the man must wait until the 21st day of the month. After he procured a small red flag, he should paint a moon, a sun, and five planets on one side. So long as he planted this flag to the east of the flower fields, no harm would befall the maidens.

The man had never experienced a task such as this in all his years of study, but he was not one to ignore the requests from any spirit, especially those who had shown him such kindness. So, with only a few days to spare, the man set out to make the flag. When the winds started to blow on the 21st day, he hurried outdoors to the most eastern part of the flower fields and nestled the flag amongst the blossoms.

Soon after, a great storm arrived. The old cottage creaked and groaned with each blast of wind, but when the man looked toward the great willow tree, not a single branch moved.

The next morning, the man was astonished to see that the flower fields, the fruit trees, and the great willow tree were unaffected by the storm. As he admired the flowers’ colors, which appeared more vibrant than ever, he saw the maidens step out from behind the tree and head toward his house.

They greeted him warmly and offered him another basket. They explained that the flowers within were a gift for their new neighbor, who had never once questioned their motives or treated them any differently than if they were human.

The flower elves said that these fragrant petals were enchanted with the elixir of immortality. If the man promised to care for the flowers year after year, the maidens would help him find his place within a realm reserved for gods, faeries, and the like.

The scholar, who on this day was most grateful for his decision to leave the city in search of wonder, ate the enchanted flowers. He lived happily ever after among the blossoms, where he contemplated life from the vantage point of the bees, the birds, and the spirits that roamed the countryside.

This retelling was adapted from the Chinese folktale, The Flower-Elves.