The winter solstice for the Northern Hemisphere occurs on Monday, December 21, 2020 at 5:02 a.m. EST.
Posted by Theresa Koch
Tags:
#winter#solstice 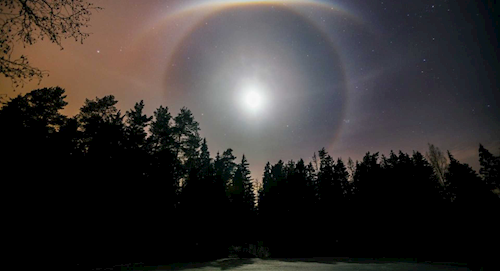 What Is the Winter Solstice?

It’s the astronomical moment when the Sun reaches the Tropic of Capricorn, we have our shortest day and longest night of the year in the Northern Hemisphere in terms of daylight. Regardless of what the weather is doing outside your window, the solstice marks the official start of winter.

What’s in store for winter weather? Read our extended forecast!

What is Does “Solstice” Mean?

The term “solstice” comes from the Latin words sol (sun) and sistere (to stand still) because, during the solstice, the angle between the Sun’s rays and the plane of the Earth’s equator (called declination) appears to stand still.

So what does that mean, exactly? Upon the winter solstice, the Sun appears at its lowest in the sky, and its noontime elevation seems to stay the same for several days before and after this day. The Sun’s gradual decrease in the sky reverses upon the winter solstice, marking what many cultures believe to be a “rebirth” of the Sun as the hours of daylight become longer.

Essentially, our hours of daylight—the period of time each day between sunrise and sunset—have been growing slightly shorter each day since the summer solstice last June, which is the longest day of the year (at least in terms of light). After December 21, the days will begin to grow longer and will continue to do so until we reach the summer solstice again, and begin the whole cycle anew.

While we celebrate the winter solstice, those living in the Southern Hemisphere will be simultaneously marking the Summer Solstice. That’s because while our half of the globe is inclined away from the Sun, their half is inclined toward it. Being tilted away from the Sun brings us shorter days and colder temperatures.

Early man kept track of the days by observing the Sun as it “moved” across the sky and cast shadows during the day and at different times of the year.  In fact, historians believe Stonehenge in England was erected to keep track of the Sun’s yearly progress.

Welsh for “Light of Winter,” Alban Arthan is a universal festival, which has been (and still is) celebrated by many people and is probably the oldest seasonal festival of humankind. In Druidic traditions, the Winter Solstice is thought of as a time of death and rebirth when Nature’s powers and our own souls are renewed. It marks the moment in time when the Old Sun dies (at dusk on the 21st of December) and when the Sun of the New Year is born (at dawn on the 22nd of December), framing the longest night of the year. The birth of the New Sun is thought to revive the Earth’s aura in mystical ways, giving a new lease on life to spirits and souls of the dead. The prehistoric monument, Newgrange built in Ireland around 3200 B.C. (making it older than Stonehenge), is associated with the Alban Arthan festival. The site consists of a large circular mound with a stone passageway and interior chambers. When the Sun rises, the chamber is flooded with sunlight on the Winter Solstice. What Stonehenge is for Alban Hefin (The Druid festival for The Summer Solstice), Newgrange is for Alban Arthan.

The Feast of Juul

This was a festival observed in Scandinavia when fires were lit to symbolize the heat, light and life-giving properties of the returning Sun. A Yule—or Juul—log was brought in and burned on the hearth in honor of the Scandinavian god, Thor. It was Thor’s job to bring the Sun’s warmth back to the people. The log, which was never allowed to burn entirely, was kept as both a token of good luck against misfortune and used as kindling for the following year’s log. In England, Germany, France, and other European countries, the Yule log was burned until nothing but ash remained. The ashes were then collected and spread into the fields as fertilizer every night until Twelfth Night, or worn around the neck as a charm. French peasants would place the cooled ashes from the log under their beds, believing they would protect the house against thunder and lightning. The present-day custom of lighting a Yule log at Christmas is believed to have originated with these fires associated with the Feast of Juul.

In addition to the traditions from western cultures, the Dongzhi Winter Solstice Festival is celebrated as a time for the entire family to get together to celebrate the past good year. As ancient Chinese thought, the yang, or muscular, positive things will become stronger and stronger after this day, so it should be celebrated. Dumplings are usually eaten.

In Ancient Rome, the Winter Solstice festival referred to as Saturnalia began on December 17 and lasted for seven days. It was held to honor Saturnus, the Roman god of agriculture and harvest, and was characterized by the suspension of discipline and reversal of the usual order. Grudges and quarrels were forgiven, wars were postponed, and people engaged in carnival-like festivities. The popularity of Saturnalia continued into the third and fourth centuries AD, and as the Roman Empire came under Christian rule, some of the festival’s customs have influenced our current celebrations surrounding Christmas and the New Year.